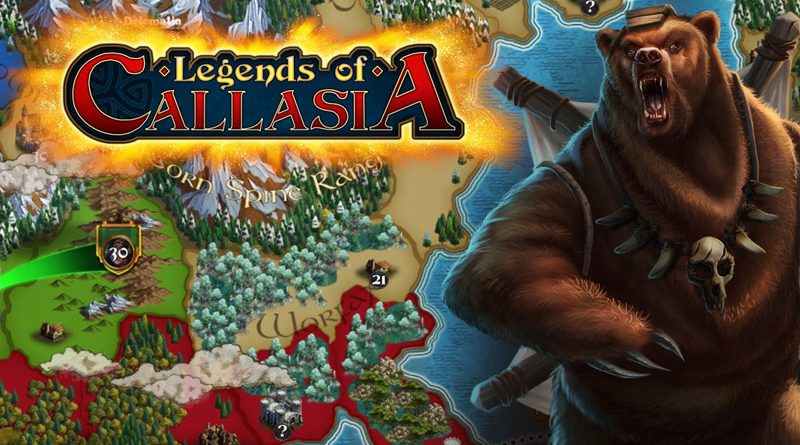 Boomzap’s multiplayer strategy game is now available for Android tablets, and a free-for-all tournament launches on all platforms

December 8, 2016, Seattle/Singapore – Just in time for the holidays, the much-awaited Android version of Legends of Callasia is here! The award winning cross-platform strategy game by veteran game studio Boomzap is now available on Google Play for mobile tablets. A free-for-all tournament also launches on the same week, which players on PC, Mac, and iOS can also join for cool prizes such as game codes, XSplit licenses, and more.

Inspired by classic turn-based strategy games like Civilization, Heroes of Might & Magic, and Risk, Legends of Callasia is a world conquest game with an original simultaneous gameplay mechanic where players can plan and resolve their turns all at the same time, adding a strategic element in predicting others’ moves. Easy to pick up and learn, the game has a classic tabletop feel, allowing players to form and lead heroes and armies, build castles and cities, and control territories and kingdoms.

Already a critical success on Steam, Legends of Callasia recently won Excellence in Gameplay and Best Multiplayer Game in the 1st International Mobile Gaming Awards in Southeast Asia for its iOS version.

The developers behind the game regularly stream and play multiplayer matches with the community on their official Twitch channel. In the tournament, players will fight for ranking points to climb the leaderboard, and the top 16 will play 1v1 matches in a single elimination tournament using standard brackets.

Download Legends of Callasia from Google, App Store, or Steam at $14.99 USD. Pay once in any of these stores and you can get the game on all platforms. A demo version with unlimited multiplayer playtime can be downloaded for free. The expansion is available for purchase at  $7.99 USD. More details available at legends.boomzap.com.

Boomzap Entertainment is a virtual game development studio headquartered in Singapore, and is proud to be a regional leader in the rapidly growing Southeast Asian game development industry. Since its formation in 2005, Boomzap has developed and released over 40 game titles on PC, Mac, Wii, iPad, iPhone and Android, winning multiple awards and selling tens of millions of units worldwide, making it one of the top casual game studios in the industry today. Learn more about Boomzap at www.boomzap.com, or follow their social media pages for updates: Facebook, Twitter, Instagram, Reddit