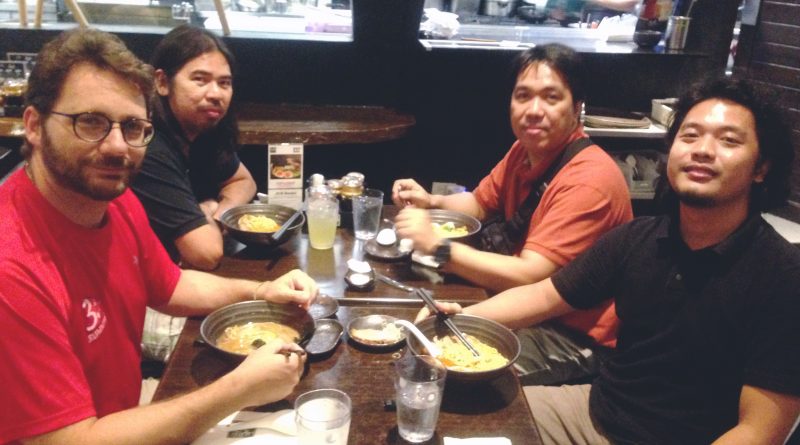 Great stuff about running Boomzap, building Legends of Callasia, and living the life of a (still) young indie game dev.

Check out the original article HERE.

Christopher Natsuume is the Creative Director for Boomzap. He helped co-found the studio in 2005, though he has been working in games since 1994 on console, PC and mobile platforms. Christopher calls running his own studio a fulfillment of a dream since he worked with his co-founder Allan in Scotland.

“I have been a game developer most of my adult life – starting as a level designer, then lead designer, then producer,” says Christopher. “The truth is – nothing prepares you for running a game dev studio like working in game dev. I had the benefit of making a lot of my worst mistakes when I was working for other people – and that’s the best way to learn: on someone else’s dime.”

“A bunch of my friends also happened to work for a game company and when they broke off and started their own company, I used to play with them at their offices every week,” Chris detailed. “I didn’t work for them but I was their dungeon master, so they asked me to join and I got a job as a Level Designer, which was my first stint in the game dev industry.”Still, Christopher was dreaming of being a game designer since grade school. Back then, he was designing Dungeons & Dragons campaigns, creating modules and the like, but regarded it all at the time as just a hobby. “Later on I discovered that you could actually make games as a career,” said Christopher.

THE LOVE OF MAKING GAMES

Christopher is definitely living the dream by being a game developer. he says that it was his dream as a child, even if he didn’t know he could make money doing it. Christopher notes that since entering game development, it’s occupied most of his time and he is happy for it.

One should enjoy making games, not just playing, in order to be a game designer.
Despite this, Christopher is quick to say that game development is not for everyone. “You should think very carefully before pursuing it. Most people want to develop games because they think it’s about coming up with great game ideas and making fun decisions. It’s not. It’s 5 percent that and 95 percent ‘figuring out how to make it work’. Be a game developer not just because you love games, but because you love MAKING them, and whatever type of game it is.”

How fit Chris is depends on what it going on in the company.

MAKING THE LEGENDS OF CALLASIA

Christopher’s creative process is one of iteration, looking at different games, whether made by him or someone else, and trying to find something that he can improve. “Our strategy game Legends of Callasia actually started as a trading simulation game, but you couldn’t fight anyone,” noted Christopher. “We decided it was boring, so we redeveloped it into a fantasy-themed multiplayer world conquest game.”

Legends of Callasia is a game that is near and dear to Christopher’s heart, so it’s not surprising that he would love to expand on the idea if he had unlimited resources. “I have always loved playing strategy games like Crusader Kings, but I never have enough time play that anymore,” said Christopher. “Legends of Callasia is the answer to that. It has all the fun of grand strategy games condensed into one to two hours, and it’s the game I’ve always wanted to make. Maybe one day if I do have unlimited resources and time, we’ll make an MMO of it? That would be the ultimate project.”

Unfortunately, financing is the hardest part of making games, between getting a publisher and paying everyone. It’s very rewarding in the end, though, especially since there are always new ideas to explore in new games. “The time between having an idea and implementing that idea is too long,” Christopher says. “I have more game ideas in my head that I can ever make in my lifetime.”

YOU HAVE TO LEAVE THE NEST TO GROW

Christopher is very proud of what the company has built over at Boomzap. The studio being virtual is a huge convenience for him and other members.

“I get to see so much of my family, and be part of my family life so much more than other people I know, especially in the game industry,” said Christopher. “I work where I want to. I don’t waste time or money commuting. I don’t have to spend a fortune going out to eat. And in the winter I work every day in a very comfy pair of fleece pants and a Japanese hanten jacket… it’s like I never got out of bed.”

Managing a studio is always a challenge, and can often involve people leaving to pursue their own ambitions. When that happened at Boomzap it was hard for Christopher, but eventually that feeling was replaced with pride over what the former team members accomplished. “Two years ago, three of our senior staff left our studio. At the time, I was pissed off, but over time I realized that it was a dream they had and one they could never achieve while at my studio,” he said. “I’ve been watching them develop their games and some of the processes they use are from what we did together in Boomzap. It is fascinating to watch them build their company and go their own direction.”