Before we get started on Last Regiment, we want to talk about some industry stuff: Kickstarter has launched its own competitor to Patreon called Drip. As a game developer, this is interesting news to us.

We’ve had two unsuccessful Kickstarter campaigns for Legends of Callasia and the major thing is that if you’re not able to fund the project in a certain number of days, you get no money at all. Despite that, we made the game anyway. Afterwards, we gained some users and had another Kickstarter for the DLC, which went through. But honestly, we’ve set our bar of success really low. Technically, we haven’t been able to fully fund a project yet.

We believe there are three scenarios to make Kickstarter work.

The first two are not options for us, and the third one is very rare, so Kickstarter has been problematic in our case. Patreon is a different thing. It’s very straightforward in how you have a service or product, and people can support you. This is good for those who consistently produce content, such as comic strips or write-ups, and Patreon is a way to help those people keep on producing that content.

And this is the same subscription tool that Kickstarter is now doing.  According to the website,  “Drip is a tool for people to fund and build community around their ongoing creative practice”.

This is obviously a big thing but we’re not sure yet how it works with games. There are already subscription options and other existing ways to do it that don’t involve going outside the game to another thing.  As of now, we don’t know yet if we want to do it with Last Regiment. It’s definitely useful in the creative world, but we’re not sure yet about the game world.

There is also the question about discovery. The one thing Kickstarter does have is 14 million people who are  willing to throw money at things, largely on  games. But why did Legends of Callasia not become a huge financial success? There are certainly problems about the game, but even so, people never knew it existed. We think there are a lot of people out  there who would love to play but never heard of it. That problem is something Kickstarter might be able to do something with, but it has a narrow focus wherein you need this money *right now*.  We are curious to see how Drip would address this issue.

Obviously there are other services like this but the problem has always been: how big is your network? That’s where platforms like Kickstarter and Steam makes it makes its money in. They already have a huge group of gamers and they’re giving you the ability to be able to talk to those gamers through their system.

Aside from the question of how big is their userbase, the next thing we need to ask is: How many products are they offering? This is a problem with Kickstarter: they do have the people, but there are also at least 200 new games in a week. Other services have few people but few games, so there is a bigger chance for people to actually see you. There is a trade-off, and an argument has to be made about whether or not it’s worth it.

The other thing we’ve been doing to get our game noticed is attending game conventions, and we are actually working on our Indie Megabooth submission right now! We’re trying to be part of it in PAX East. It’s a great show, as well as PAX East, but the value of going to same show with same game degenerates over time.

During the first show, it becomes a big deal because nobody seen it before. On the second show, it is less so since they’ve already seen it, and you’d just get looked over a bit. So right now the plan is if we get accepted to the Indie Megabooth, we’ll be going to PAX East. If not, we’re not going to buy a regular booth because the return on investment is not worth it.

Another thing is that we’re not really a fancy game and can’t have a big screen showing a huge fight. We’re a strategy game, which is slower and quieter, and when showing it by ourselves., it is difficult to get people to come to our booth. Again we go into the rabbit hole of how do we market our marketing?

From the perspective of the press, streamers, and other influencers, they would have a list of what they want to see at the show. Nobody comes to PAX to see what Boomzap’s up to. Getting them to come to our booth is actually a struggle. We have to reach out to them early on and make an argument for them to come.

If you’re in the Indie Megabooth, everyone in the press would check that out.  It’s on their list. They would come by,  but you still need to try to get them to play, though at least you get some eyeballs. Like Kickstarter and Steam’s user base, the Indie Megabooth is a big thing that people know and would come to.

Another option is to sign up with boutique publisher that has a PR agency that makes everything happen for you. That’s great but we don’t want to have a publisher. So we’re trying to find a place where we can be on a “to do list” that doesn’t involve a publisher because we are trying to be independent.

We’ve also started to receive more questions about Earlier Access. The hope is that we get around 20 to 30 people in the beta list, and we’re expecting them to be those who are already interested in the game now.

There is no definite date yet on when it would begin, but the plan is sometime in January or February.  There is the question of how far along do we want to be in the game before we start.  We can give it to you relatively early with broken stuff that would likely change and entirely different from final version, and we’re hoping that the people who are in the closed beta would be cool with it.

It’s likely that we’ll do the beta through Steam, so that it won’t get pirated as much. We’ll probably do a weekly build where we can turnaround balance decisions like altered stats and address other feedback we receive. Internally we can do daily builds but putting it over on Steam would be a real task, but if we have something new to add, we can go do that.

It won’t be a full game. The game modes such as single player campaigns and other content won’t be complete. It’s something that we’ll gradually work on as we get closer to release. But that is the point of beta – you’ll get to see it earlier than anyone else, before a lot of it is done.

Given our schedule for Earlier Access, we need to start thinking about how the single player modes would work.

The length for single player campaigns depend on the number of missions and hours of gameplay. There’s still a lot of testing before  we know how long missions take. If they take longer, we’ll make fewer missions. If they are shorter, we make more. What we might actually do is build a series of missions that have variety in length, with around 20 hours of total gameplay.

We also want to make skirmishes more interesting by having goals that aren’t always exactly the same, such as capture the flag, king of the hill, etc. A lot of discussion still needs to takes place to sort out how the game works. It’s time to start thinking about the lore and story and how we do the single player missions.  We need to  look at other games and listen to feedback from players to see what they want.

How much would single player impact multiplayer? It comes from our experience in Legends of Callasia where we had a user complain why everything is not yet unlocked, so what we did was when you bought the game all the factions and units were available in multiplayer. The players then asked “Why am I even playing single p[layer?”

That was a mistake we made and for Last Regiment, we want to make sure that single player has meaning and what you’re doing has value. We have not figured it out completely yet, but the plan is to have players unlock factions through the campaigns, starting with Olivia and Ruma faction. While going through story, you meet new people, interact with different characters, then unlocking them as playable factions.

We also want to make sure that players learn how to play the game before trying out multiplayer.  The plan is to integrate the tutorial into the story, and have Multiplayer mode unlockable by playing. By the time you show up in multiplayer, you should know what you’re doing when playing against other players and know what’s happening.

As always, we’ve made several adjustments to the game, but for this blog we want to focus on the UI revamp, because that is what players would immediately see. Aside from adding more rococo elements, it is important that the UI is able to communicate how the game works. 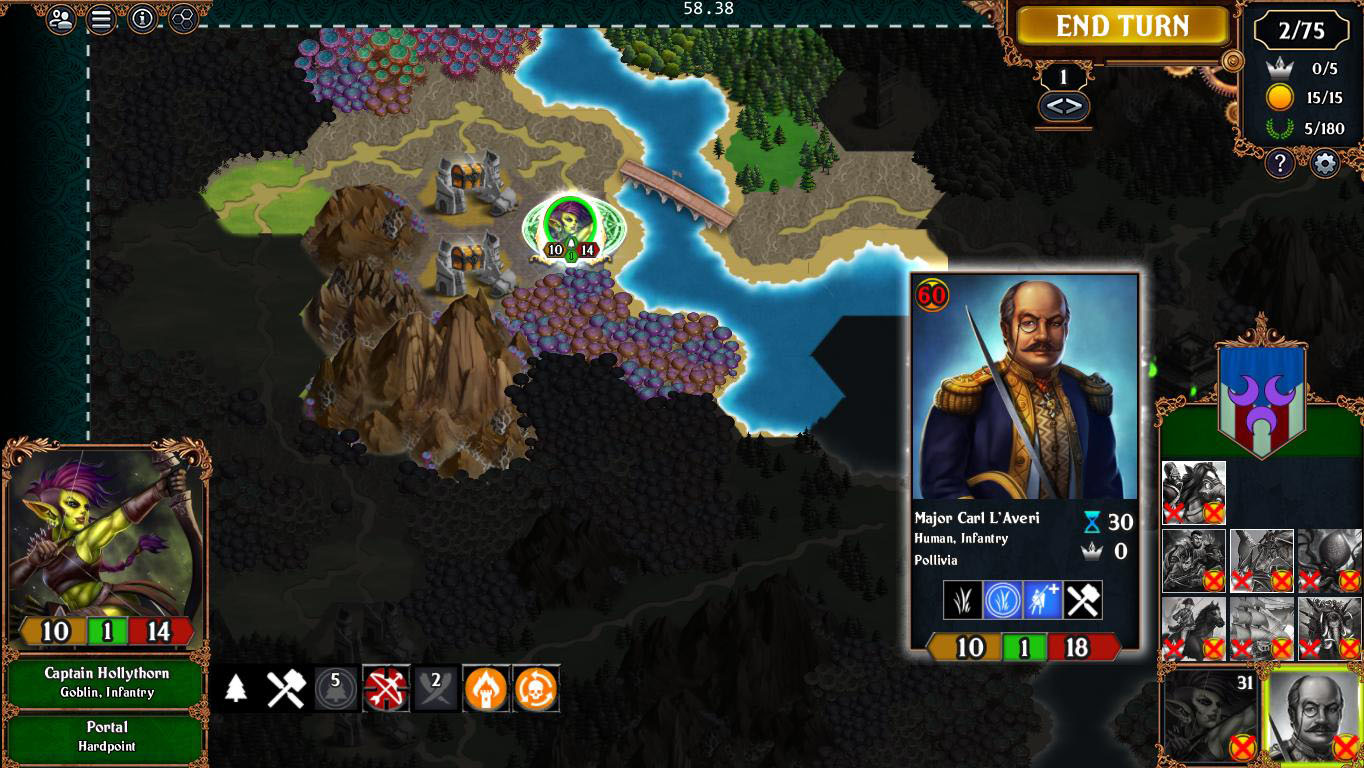 We were looking at the old way of choosing regiments, and we didn’t really like it. It was difficult to select a hero and find out what it does or what value it brings to me. And so we looked at how you built decks in other games where you can see all the cards in one glance. 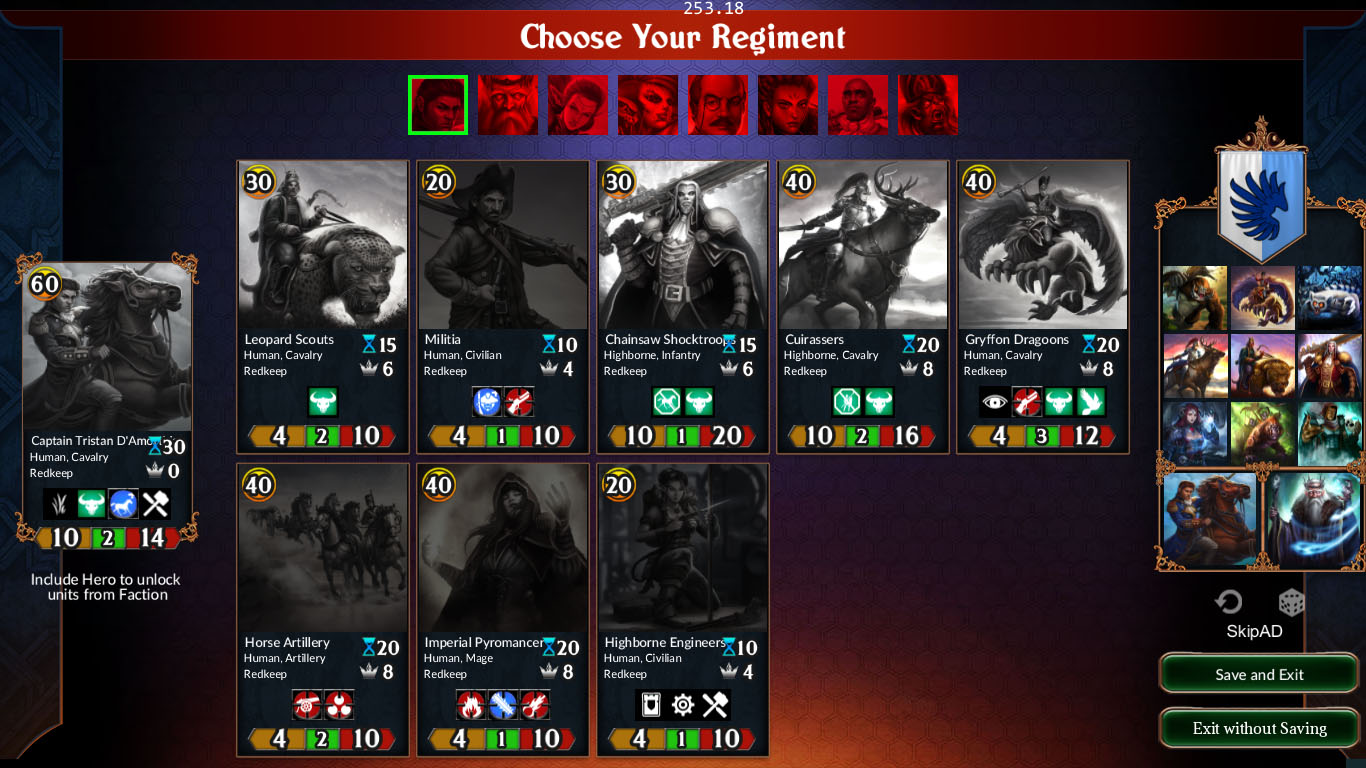 It’s still placeholder, but we’ve made the framing better. We also wanted to fill the screen with pretty art and make sure you saw them. We’ve added a player language wherein grayed out units can’t be selected, and you can only choose the colored ones. We’ve made it easier to click on a unit to view its description and abilities.

In the future, we want these panels more themed to the factions. Right now just looks like a set of cards. We want this to be a place where we could express some of the history and lore of the game. It sounds trivial, but later on when we add new factions or release DLCs, there is a sense of discovery and excitement.